Trachoma, caused by repeated ocular chlamydial infection, is the leading cause of infectious blindness worldwide. The WHO recommends repeated mass antibiotic treatments for trachoma, and researchers from the Proctor Foundation, led by Dr. Tom Lietman, are currently conducting clinical trials in Ethiopia to determine the best strategy for mass treatments. We are currently studying several ancillary aims from these trials. For example, we found that an RNA nucleic acid amplification test is a more sensitive indicator of ocular chlamydial infection than a DNA test. Using this RNA test, we found that an important risk factor for persistent ocular chlamydial infection was lack of treatment with mass antibiotics—arguing for the importance of antibiotic treatment programs for trachoma elimination. In the upcoming year, we will assess the cost effectiveness of various treatment strategies for trachoma, and further study the role of mass azithromycin distributions for childhood mortality.

Diagnosis and Treatment of Cytomegalovirus Retinitis

Cytomegalovirus (CMV) retinitis is a retinal infection commonly seen in HIV patients with severe disease. CMV retinitis is still a major cause of blindness in southeast Asia. Since many patients do not have visual symptoms early in the disease, regular eye exams of at-risk patients are necessary. However, there are not enough ophthalmologists in many countries to screen for CMV retinitis. Telemedicine diagnosis is a potential alternative. Along with Dr. Todd Margolis and researchers at a district hospital in Chiang Mai, Thailand, we are testing whether an HIV clinic can use telemedicine to identify CMV retinitis. Another option would be training HIV providers how to use an indirect ophthalmoscope to visualize the retina. In a study in Myanmar, we found that non-ophthalmologists were able to effectively diagnose CMV retinitis after a 4-day workshop. In the following year, we plan on following a cohort of patients with CMV retinitis to better determine optimal treatment practices.

Diagnosis and Treatment of Acanthamoeba Keratitis

Acanthamoeba keratitis is a corneal infection that primarily affects contact lens wearers in the United States, and agricultural workers in developing countries. This infection can be difficult to diagnose and treat. We currently have a planning grant from the National Eye Institute to design a clinical trial. The proposed trial will (1) assess the value of newer diagnostic modalities for acanthamoeba keratitis, including confocal microscopy and polymerase chain reaction, (2) compare treatment with a single anti-amoebic agent versus multiple agents, and (3) assess the value of adjunctive topical corticosteroid therapy. We are currently performing several preliminary studies, including studies of the risk factors and outcomes of acanthamoeba keratitis, and microbiological studies of the susceptibility of recent acanthamoeba isolates to a variety of anti-amoebic agents. 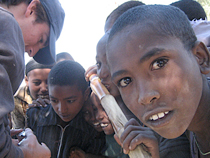