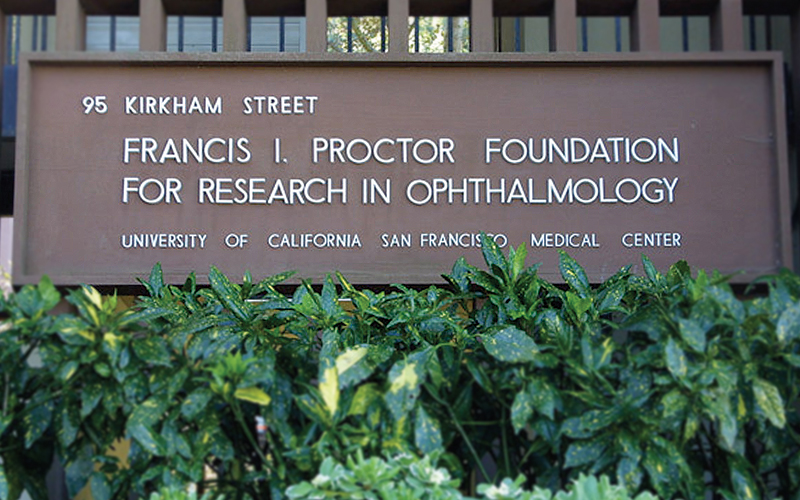 The Francis I. Proctor Foundation for Research in Ophthalmology is an internationally renowned, privately endowed organized research unit at the University of California San Francisco. The Foundation is dedicated to research and training in infectious and inflammatory ocular diseases, and the application of this research to the prevention of blindness worldwide. It is recognized as the preeminent center in the world for this discipline.

The Foundation is supported by endowments, research grants, private donations, and clinical practice income. It is administratively and functionally distinct from the Department of Ophthalmology at UCSF.

The F.I. Proctor Foundation for Research in Ophthalmology was established in 1947 in San Francisco through the joint action of Mrs. Francis I. Proctor of Santa Fe, New Mexico, and the Regents of the University of California. Mrs. Proctor intended the Foundation to be a memorial to her husband, Francis I. Proctor, MD, who died in 1936. 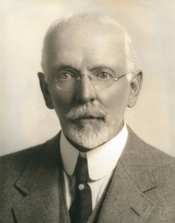 Born in Boston in 1864, Francis Proctor pursued his undergraduate and medical studies at Harvard University where he received his medical degree in 1892. After completing his ophthalmology training in Germany, Dr. Proctor returned to Boston, entered the practice of ophthalmology, and took part in the educational activities of the Massachusetts Eye and Ear Infirmary. In 1927 he retired to Santa Fe, New Mexico. There he and Mrs. Proctor developed an interest in health problems of Native Americans among whom blinding trachoma was then widespread. His deep interest in Native American eye health led to his appointment to the Bureau of Indian Affairs as consultant on trachoma, and he served in this capacity to the end of his life.

Because the infectious cause of trachoma was not firmly established, Dr. Proctor pursued research efforts to find the causative agent and encouraged young investigators working on the problem. Among this group of young physician scientists was Phillips Thygeson, MD, then in postgraduate studies at the University of Colorado. In 1934, Dr. Proctor helped Dr. Thygeson organize a trachoma research laboratory at Fort Apache, Arizona. There, with Dr. Thygeson, he participated in research that established the cause of trachoma as a filterable agent, identical with the Halberstaedter-Prowazek elementary body. Dr. Proctor remained actively involved in experimental work on trachoma until his death.

In his will, Dr. Proctor left a portion of his estate to support research on trachoma and other eye diseases. A committee appointed by Mrs. Proctor recommended that the income from Dr. Proctor's estate be distributed to universities in the form of grants-in-aid for ophthalmic research. During World War II, unallocated income from the estate accumulated and Mrs. Proctor consulted Dr. Thygeson, then in the Army Air Corps, about the best use of the funds. He and Mrs. Proctor agreed on the establishment of a memorial research laboratory at a west coast university. 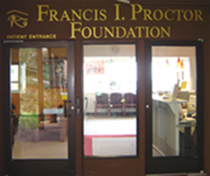 Negotiations with the Regents of University of California led to the establishment of the Francis I. Proctor Foundation for Research in Ophthalmology at the University's Medical Center in San Francisco. Since its inception, the Proctor Foundation has grown from a single laboratory room with a small part-time staff to a research organization comprising more than 12,000 square feet of laboratory, clinic and office space with a faculty and staff of more than 50 people. Acquisition of the initial laboratory space was made possible by a donation from Mr. and Mrs. Berthold Guggenhime. This manner of acquiring space by purchase has been a key factor in ensuring the Proctor Foundation's continuing autonomy.

Mrs. Proctor made many other gifts to the University, including one in 1953 for the construction of a medical office building for patient care by Foundation faculty practitioners. The Proctor Foundation Building at 95 Kirkham Street was constructed in 1953-1955 on property adjacent to the UCSF campus. The first floor of the building is devoted to clinical space for outpatient care. The lower floor houses the Kimura Ocular Immunology Laboratory. 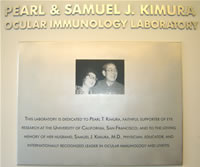 In 1958, Mrs. Proctor and Mr. Forrest Davidson made generous gifts which were matched by the US Public Health Service to purchase laboratory space on the third floor of the UCSF Medical Sciences Building. This new laboratory became the World Health Organization Collaborating Centre for the Prevention of Blindness and Trachoma. The Centre is now a leading laboratory for research on the molecular biology and immunology of Chlamydia and on the epidemiology of trachoma and other chlamydial infections.

Two additions were made to the Proctor Foundation building at 95 Kirkham Street in 1965. A third floor laboratory was constructed on top of the existing building, and an east wing was added. The additional space now houses the clinical microbiological laboratory, the cytochemistry laboratories, and the Harry Hind Library as well as faculty and administrative offices. The east wing houses the Ralph and Sophie Heintz Laboratory, a state-of-the-art herpesvirus research laboratory.

The organization of the Proctor Foundation was stipulated in the agreement between the founder, Mrs. Proctor, and the Regents of the University of California. This plan calls for the Director of the Foundation to be responsible to a Board of Governors which consists of the Chancellor of UCSF, the Chairman of the Department of Ophthalmology, and an Independent Governor (originally Mrs. Proctor's representative). The current Board of Governors is comprised of Sam Hawgood, MBBS Chancellor, UCSF; Stephen D. McLeod, MD, Chair, Department of Ophthalmology; and, John P. Whitcher, MD, MPH, Independent Governor and Treasurer. The Foundation was directed from 1947 until 1959 by Michael J. Hogan, MD. In 1959, he was succeeded by Phillips Thygeson, MD, who held the position until 1970. The third director, G. Richard O'Connor, MD, served from 1970 to 1984, and he was succeeded by Chandler Dawson, MD, in July 1984. John P. Whitcher, MD, MPH, was appointed Director in August 1995. Todd P. Margolis, MD, PhD, held the position of Director from 1999-2013, with Thomas M. Lietman, MD, serving as director from 2014.

The mission of the F. I. Proctor Foundation is the prevention of blindness worldwide through research and teaching focused on infectious and inflammatory eye disease.